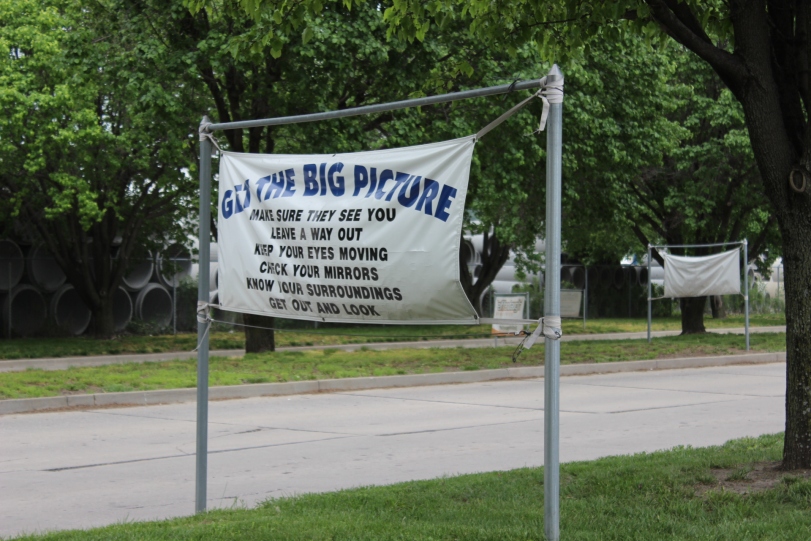 One of the days my truck was in the shop I decided to go for a walk.  It had been pretty hot the previous few days and this day it was actually cooler and slightly overcast.  It looked like it was threatening to rain.  I brought an umbrella along and a waterproof sleeve for my camera.  I’ve been curious to try it out.

Less than half a mile from our truck terminal is a river.  I don’t know the name of the river.  Wait–I will use my Google-fu to determine….Ah.  Here we are.  It is the Kansas River.

I found some paths next to the freeway that took me down to the river.  You wouldn’t know by all the greenery that I was in the middle of a city.  Well, you can kind of see the freeway bridge in the photo below.

Hmm. Which path to choose?

The path I chose took me to a little berm and then opened up to the Kansas River.

I walked down and saw a couple of guys fishing.

The kid actually had what he thought was a pretty big one here. The pole was bending a LOT (though not in this pic so much). He thought the fish might be 30 pounds or so. Then the line broke.

The fish are taunting this guy. They kept leaping up at him every time he threw the net. “Hah! Missed me boyyy.” The damn fish kept leaping like face height. It was pretty comical. And it wasn’t just this one. There were a couple of other bigger ones that jumped, too. 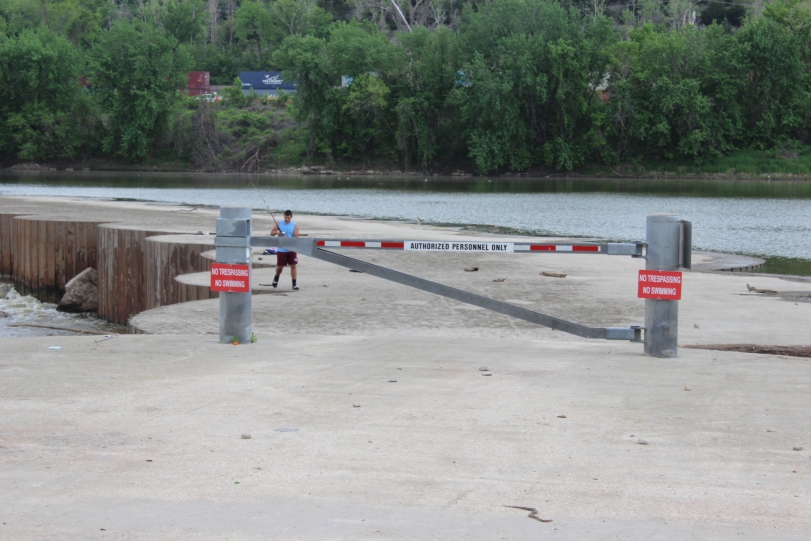 Such a strange concrete structure. The water was almost level with it on the right. If the water was any higher, it would have been covering it. 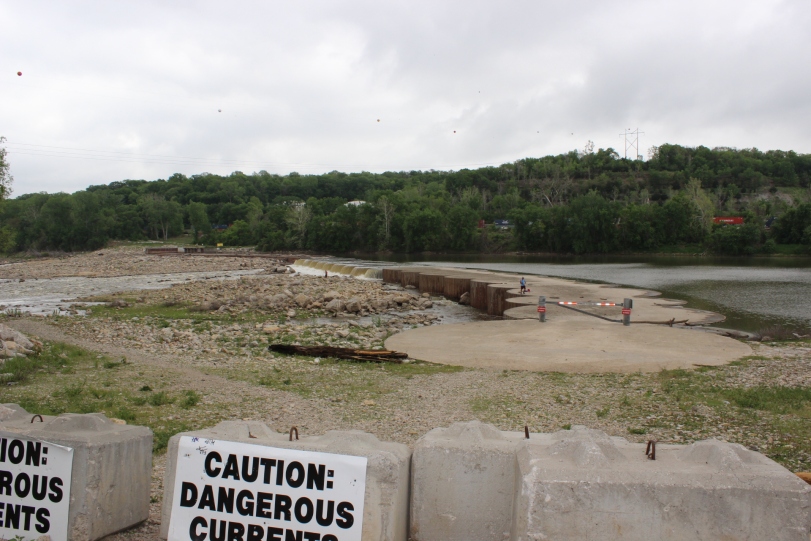 I got into an interesting conversation with the kid.  There were fish literally littering the concrete.  I asked him what they were, and he said they were gar.

“Trash fish,” he explained.  I asked him if people can eat them, and he said some people think so.  I didn’t think they looked particularly good.  Long and skinny, they look like they would all be bones.  And they rather reminded me of prehistoric fish what with their mouth of giant, razor sharp fang teeth.  “Those will rip holes in you, if you’re not careful, ” he warned.

Gar.  There were a few dozen of these laying around.

The gar are apparently a very hardy fish and refuse to die.  I was down there for over a half an hour, and those that were alive when I got down there were still flopping around when I left.  The kid I talked to said that some of them had been like that for about four hours.  Four hours?  They may be trash fish, but it seems cruel to prolong their death like that.

Anyway, the young man proudly showed off his slippery, wiggly catch, a couple of decent size catfish.  “That’s good eatin’ right there,” he said.  I asked him  if it was safe to eat the fish from the river, because the water looked rather questionable.  He assured me it was fine, as long as you didn’t overdo it. 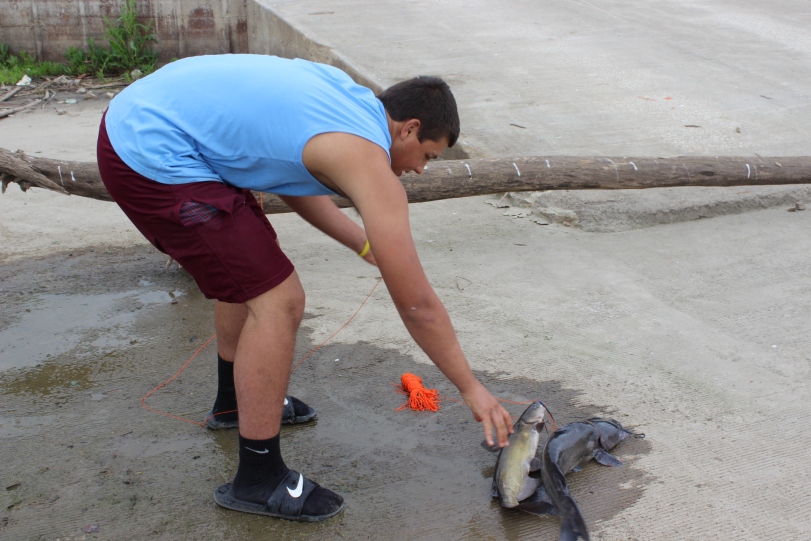 I asked him if he had ever gone noodlin’ before.  He said he had.  He even showed me his tackle box.  “I keep these gloves for that.  There’s beavers around here and I don’t want to get bit.”  Note to self:  noodlin’ in Kansas is dangerous.

He seemed like a sweet kid.  He told me he was out here from Illinois visiting his dad and that while his dad worked down the street, he would come down here and fish.

The other guy fishing had an enormous catfish (?) himself, but he didn’t hold it up long enough for me to catch a picture of it.

After chatting with the kid, I decided to keep on walking and wandered on the paths around there for a bit.  Then I made my way to the road and decided to walk down to where I had seen on Google Maps another way to get to the river.  It was about two miles down from there.  Along the way, I passed grain fields interspersed between industry.  It was kind of weird, the mix.

Am I really in a ginormous multi-state city, or am I imagining things?

Eventually, I got to this little park.  It had a few picnic tables,  a portable potty, and a boat ramp. 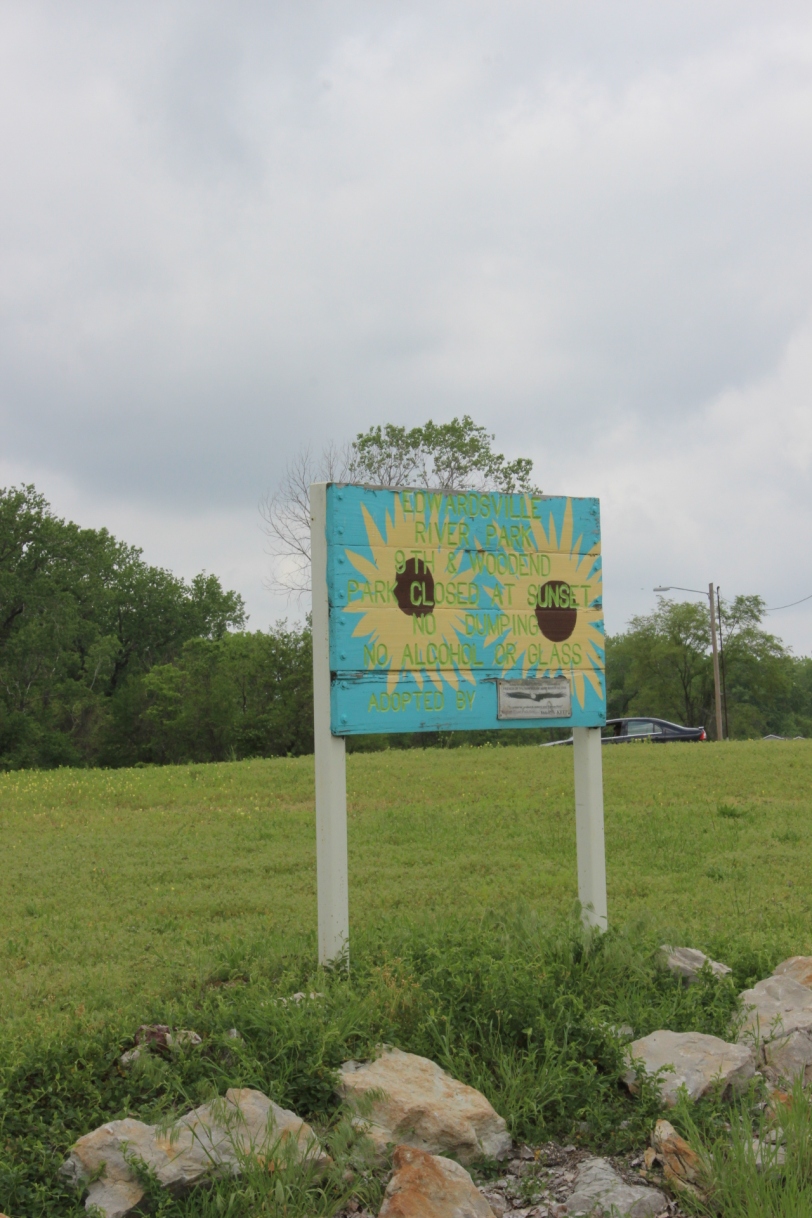 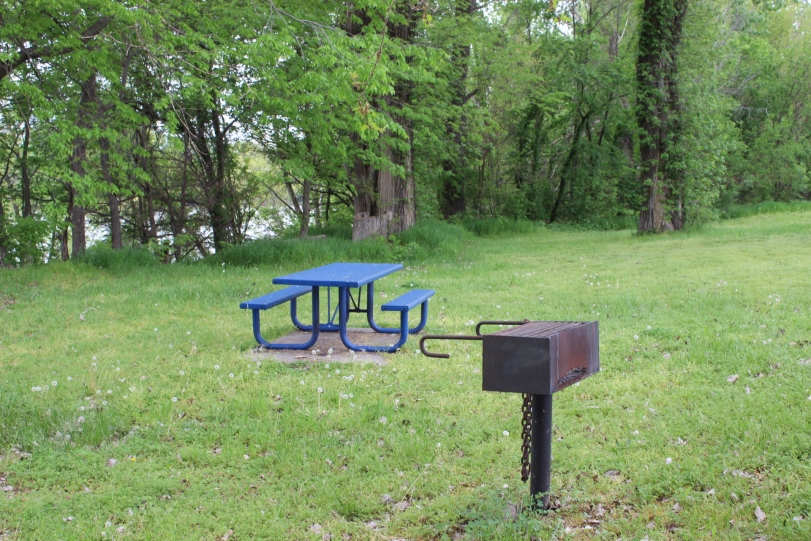 I walked down the ramp and along the river.

It was pretty, but it stank. 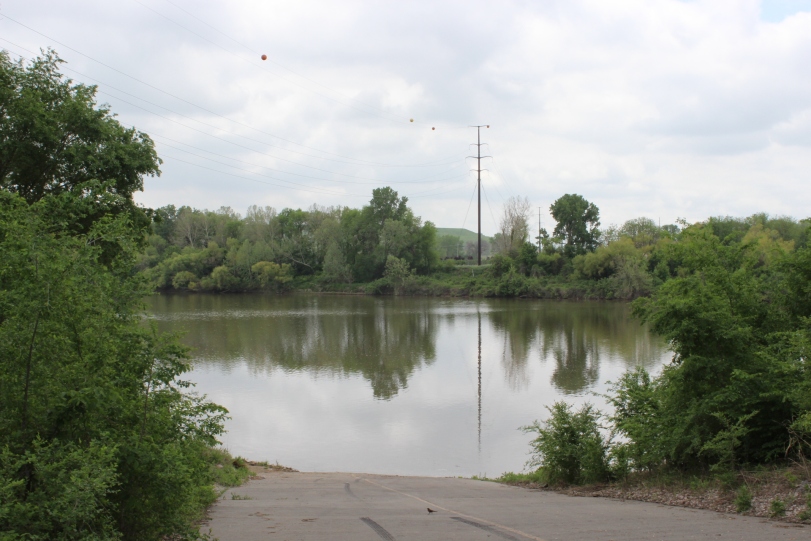 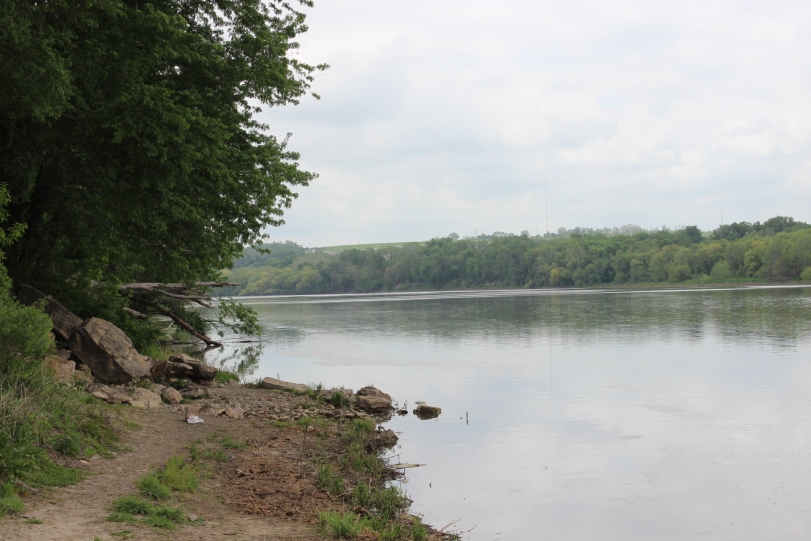 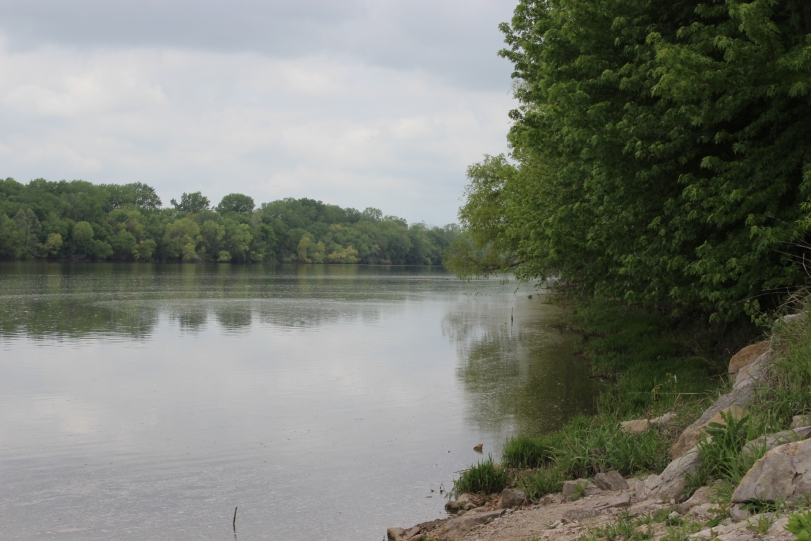 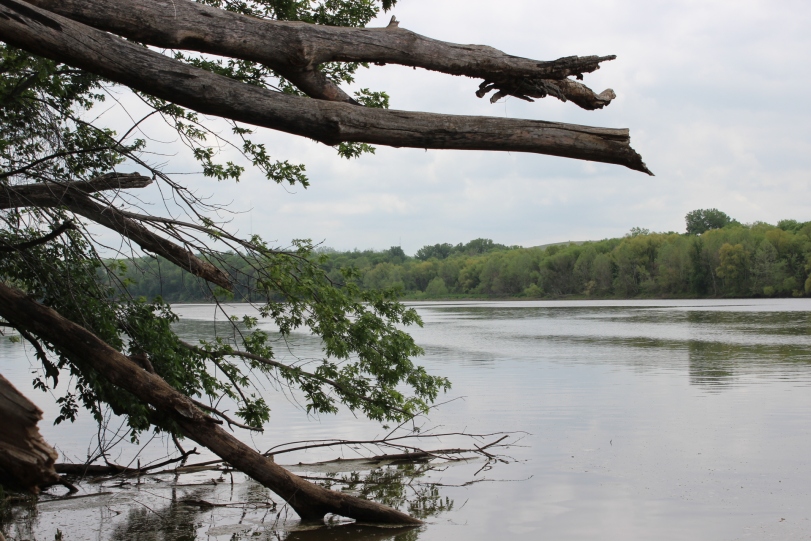 Then I saw why. 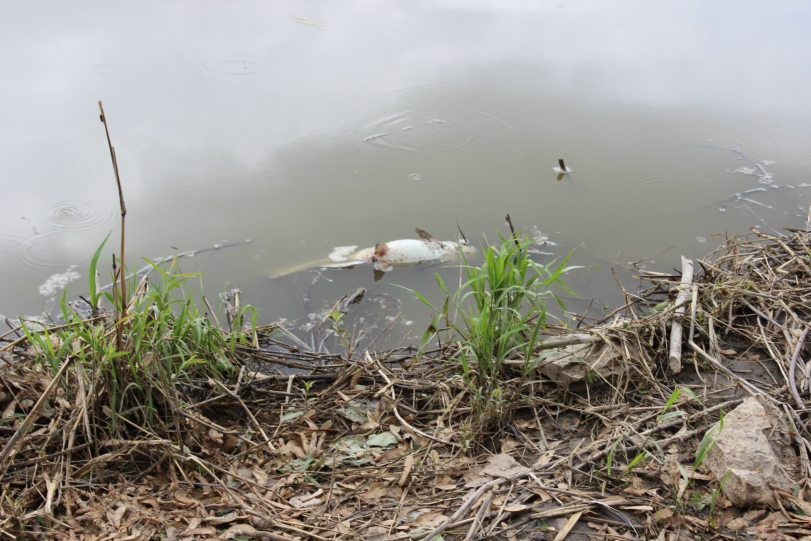 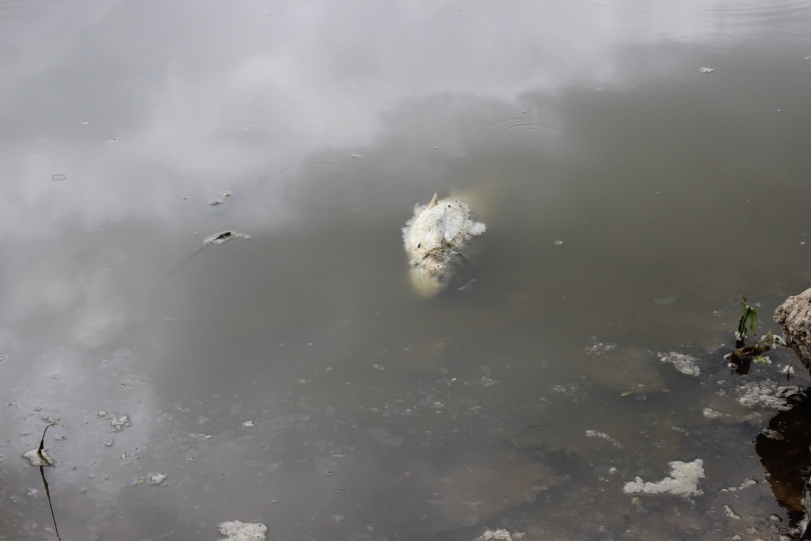 There were probably about a dozen or so fish in various stages of decay.  Yuck.

I’m guessing these are the Asian carp–also a trash fish and invasive species local officials are trying so hard to remove–and that the fishermen dump them after killing them.  But I really don’t know.  It was disgusting, though.  And if that isn’t what they are, I don’t know why they are dead.  In which case, I don’t think I want to eat ANY fish from this river.  Who knows what it is that is killing them?

But despite this grossness, I did enjoy my walk.  I wandered about and had a great time.  I ended up walking about 8 1/2 miles that day, something I haven’t done in some time.  I got three blisters in the process.  I need new shoes.   The best thing is that it didn’t rain.  In fact the sun decided to come out toward the end of the walk.  I ended up getting a horrible sunburn on the skin of my back where I couldn’t reach to put the sunscreen.  It’s still a bit tender today.

Leaning column of Truck Stop. Somebody smashed into it and now it’s not right.

Wild grass of some kind. I thought it was pretty.

I thought this had a neat geometry to it.